Zoned Namespace (ZNS) SSDs is SSDs that implement the Zoned Namespace Command Set as defined by the NVM Express™ (NVMe™) organization. The specification provides a zoned storage device interface, that allows the SSD and host to collaborate on data placement, such that data can be aligned to the physical media of the SSD, improving the overall performance and increases the capacity that can be exposed to the host.

The most reason version, ZNS Command Set 1.0, was released on June 16th, 2020 to meet industry demands. The ZNS Command Set 1.0 specification addresses requests to improve the data placement capabilities of flash storage and to be exposed through a standardized interface.

NVMe ZNS SSDs achieve these benefits by exposing a set of zones in an NVMe™ Namespace, where each zone requires to be sequentially written and reset explicitly, similarly to SMR hard-disks.

The introduction of the zone abstraction allows a ZNS device implementation to optimize logical block mapping for the physical media. In the case of flash-based devices, the media requirement for sequential data writes within certain areas matches the ZNS protocol sequential write zone concept. The device controller no longer has to manage random writes, and therefore can have a more efficient implementation that can provide some or all of the above mentioned benefits.

The NVMe Zoned Namespace standard was developped based on the Host Managed Zoned Storage Model introduced for SMR hard-disks with the SCSI ZBC (Zoned Block Command) standard and the ATA ZAC (Zoned ATA Commands) standard. A compatible zone state machine was defined, and a similar set of Zone Block Commands was defined.

These similarities simplify the implementation of the host storage stack and applications for simultaneously support both host managed SMR hard-disks and NVMe ZNS SSDs.

However, the NVMe Zoned Namespace introduces some differences that need special attention.

ZBC and ZAC SMR hard-disks can optionally expose a number of conventional zones which accept random write operations. This optional set of random write zones is not defined by the NVMe ZNS specifications. NVMe Zoned Namespaces only support one type of zone: Sequential Write Required zones. The NVMe device may however expose a random writable area as a separate conventional namespace on the same controller.

The NVMe Zoned Namespace specification introduced the concept of a Zone Capacity. This concept is not defined in the SCSI ZBC and ATA ZAC standards.

This new attribute was introduced to allow for the zone size to remain a power of two number of logical blocks (facilitating easy logical block to zone number conversions) while allowing optimized mapping of a zone storage capacity to the underlying media characteristics. For instance, in the case a flash based device, a zone capacity can be aligned to the size of flash erase blocks without requiring that the device implements a power-of-two sized erased block.

The figure below illustrates the zone capacity concept.

As the logical block addresses between the zone capacity and the end of the zone are not mapped to any physical storage blocks, write accesses to these blocks will result in an error. Reading in this area is handled in the same way as when reading unwritted blocks.

A zone with a zone capacity smaller than the zone size will be transitioned to a full condition when the number of written blocks equals the zone capacity.

A controller implementation typically requires the allocate of internal resources (e.g. a write buffer) to execute write operations into zones. Limitations on the total amount of resources available to the controller may imply a limit on the total number of zones that can be simultaneously in the implicit open or explicit open conditions. This potential limit on the maximum number of open zones is similarly defined in the NVMe ZNS, SCSI ZBC and ATA ZAC standards.

The NVMe specifications allow a device controller to execute commands present in the several submission queues available in any order. This has implications for the host IO stack, namely, even if the host submits write commands directed at a zone sequentially, the commands may be reordered before they are processed and violate the sequential write requirement, resulting in errors. Host software can avoid such error by limiting the number of write commands outstanding per zone to one. This can potentially result in poor performance, especially for workloads issuing mostly small write operations.

To avoid this problem, the NVMe ZNS specifications introduced the new Zone Append command. This command does not defined by the SCSI ZBC and ATA ZAC standards. A zone append comamnd is a write operation that specifies the first logical block of a zone as the write position. When executing the command, the device controller write the data within the zone indicated, but do so at the current zone write pointer position. This change in the write position is automatic and the effective write position for the data is indicated to the host through the command completion information. This mechanism allows a host to simultaneously submit several zone append operations and let the device process these in any order.

In the eaxmple above, the host must issue to the same zone three different write operations for data A (4KB), B (8KB) and C (16KB). Using regular write commands, this can be done safely only at a write queue depth of 1 per zone,i that is, the host must wait for the completion of an outstanding write operation before issuing the next write request. For each write request, the write position must be equal to the zone write pointer position. This result in the data being stored in the zone in the same order as issued.

Using zone append write operations, the write queue depth constraint is removed and the host can issue all three write requests simultaneously. Upon completion of all write requests, the zone write pointer position is identical to the previous case as the total amount of data written is equal. However, the location of the written data within the zone may not correspond to the host command issuing order as the device controller is free to reorder command execution as it sees fit. The host can discover the effective write position of each request through the zone append completion information. 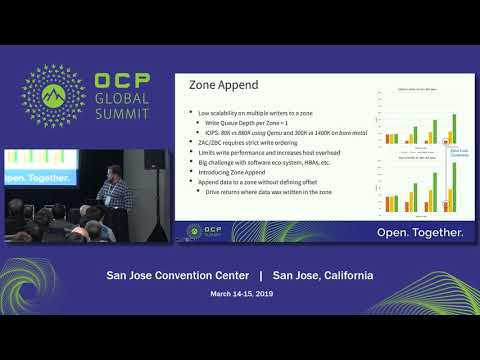 The presentation covers the motivation for ZNS SSDs, the journey, and a general overview of the interface.

From here you can search these documents. Enter your search terms below.